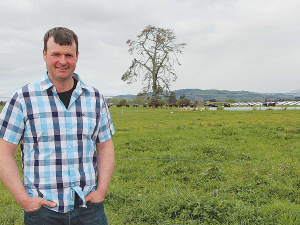 And while he accepts that herd testing four times a year is standard practice, Brad admits he’s no ordinary farmer and does things “a bit differently.”

He copes fine with his nine, as opposed to 10, herd tests annually, he says.

“For me, it’s all about data and the insights it provides,” Brad says.

“Herd testing is crucial to any farmer, without a herd test you have nothing to go on.

“Just look at any business, like banks for example: Now they do budgets and audits on their financial positions all the time. It’s just a way of doing basic checks and balances and making sure nothing is amiss.

“Farmers are no different – to me the herd test is a basic, regular, audit. I need to see the profitability and health status of each cow. Each cow is a profit centre; some profit centres will perform and make me money, but I need to identify and weed-out the ones that don’t.”

Given the state of his herd, it’s hard to argue with Brad’s strategy of constant measuring and monitoring: His herd’s breeding worth and production worth (BW & PW) are ranked in the top-2% and top-1% respectively of the national milking herd (i.e. all herd-testing herds that milk a minimum of 50 tagged cows).

Even in a low payout or drought year, Brad’s advice to fellow farmers is to avoid cutting the herd test from the budget; rather, it should be thought of as a nondiscretionary investment, he says.

“During a low payout if you’re saying no to even a single herd test, well that’s a year’s worth of figures you’ve lost. I know that all people don’t sell or do the breeding thing, but if I was that sort of farmer who was without a single test, I’d have no idea of what’s going on.”

While parentage information is useful, it’s not enough, Brad says.

“Her parentage might be good, but she could perform a long way from what the parent average is, because that’s nature. Parentage information, even genomic information, reduces risk – but I still put a lot of emphasis on the first herd test.”

Because the farm also does all-AB, it consistently has surplus heifer calves, and herd test information provides Brad with information on, for example, month-old calves. “So when I’m in a position to sell some, I’m always selling off my bottom-end,” he says.

The January herd test samples double as a test for Johne’s disease information, data that feeds in to the farm’s 10-year Johne’s control plan.

As a commercial farmer, Brad says herd testing is crucial in monitoring somatic cell counts, helps dictate mating decisions, helps decide on culls as possible feed pinches emerge, and heavily influences which surplus cows to sell (should there be a high number of replacement stock).

But the herd test is also a way of knowing which cows are delivering ‘honest’ milk.

“The milk docket gives you your herd average, but the herd test tells you who your really good cows are, and who aren’t.”

At the end of the season, herd test information is used for dry off decisions, with days-in-milk and production worth balanced against the health and wellbeing status of the cow, and individuals picked out for targeted dry cow treatment.