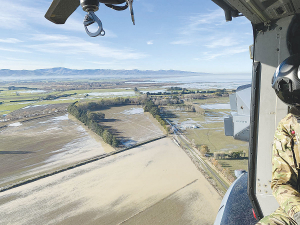 Canterbury farmers are dealing with a massiver recovery effort after the recent floods.

“The flooding has caused widespread and significant damage across a number of districts and recovery efforts are ongoing and considerable.

“It’s clear that extra funding is needed to relieve pressure on farmers who have also been battling drought.”

Associate Agriculture Minister Meka Whaitiri said the region’s farmers and their communities have a large task ahead of them.

“The new funding we’ve announced today should help towards paving the way for ongoing recovery efforts in Canterbury. The Government remains committed to helping them get through,” she said.

DairyNZ says it is reassured to see additional funding delivered.

“Farmers in Canterbury have had a huge job on their hands cleaning up after the floods earlier this month – many have had paddocks and infrastructure with significant flood damage,” Mackle said.

“This has left farmers with parts of their businesses unable to function or with huge, manual and costly work to be done to clean up and get back to productive capacity.

“Additional funding to support the clean-up is very welcome and we encourage farmers to seek it out. We value the Government’s assistance to the sector.”

Meanwhile, the Ministry for Primary Industries (MPI) says it is working to help drought and flood-affected farmers in Canterbury to find alternative grazing for their livestock.

“I have visited farms where pasture and winter fodder crops have been buried under flood debris,” says MPI’s director of Rural Communities and Farming Support Nick Story.

“This event has been an extremely challenging situation for farmers. The worst affected farms have a need for alternative grazing for their sheep, beef cattle and dairy cows.”

MPI’s Feed Coordination Service has been expanded to help find grazing, distribute donated feed, and connect people with surplus feed to farmers who need it.

“Our feed coordinators had more than 35 additional requests from flood-affected farmers in the first half of June who need grazing and feed,” says Story.

“It’s likely the worst flood-affected paddocks will be unusable for some time, so we expect demand will increase further as we move through the winter.”