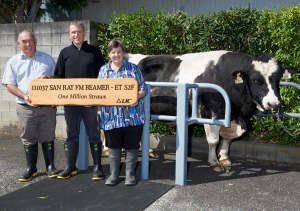 Ray and Sandra Hocking with Simon Worth from LIC (centre).

One of LIC’s longest-serving bulls has reached the achievement of selling one million semen straws, just in time for Father’s Day.

The ten-year-old bull is the latest of just four bulls from LIC to hit the one million straw mark, joining company with 90274 SRD Dawsons Belvedere, 90281 Kingsmill PA Walesa and 96329 SRB Collins Royal Hugo.

LIC says Beamer’s achievement may be the most impressive out of the entire group.

Beamer comes from an era where new bulls are superseding older bulls in LIC’s Premier Sires teams at a faster rate than ever before, mainly due to the co-op’s investment in genomic technology.

This means it is very unlikely that another bull will ever reach the volume of straws that Beamer has delivered.

LIC says Beamer has been popular with farmers primarily due to his mix of high breeding worth (BW) and good total overall production traits as a reason for favouring him. He was the number one ranked Friesian daughter proven bull for BW when he became proven in 2015.

“It really is rewarding to see one of the industry’s highest indexing bulls contribute so much. And to be recognised further through the likes of Holstein Friesian New Zealand’s award system is just a feather in the cap. In 2015 he won the highly-regarded Mahoe Trophy and more than a dozen of his daughters have won awards as part of senior and junior progeny team awards in the Boehringer Ingelheim Progeny Competition.

“Six years in Premier Sires is an outstanding achievement and one we will see less of given the faster turnover of bulls in this genomic era. As a result, I believe Beamer will be the last to sell a million straws in New Zealand.”

Beamer’s legacy looks like it will carry on for years to come as well; three of Beamer’s daughter-proven sons are in the current Premier Sires teams along with multiple offspring in genomic teams.

Beamer will enter his sixth consecutive season as an LIC Premier Sire this year has a BW of 225.