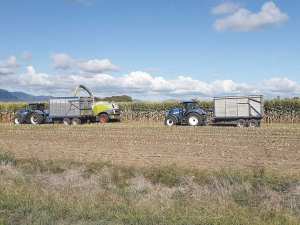 Bumper maize crop being harvested on Nacre and Anthony Maiden’s farm in Waikato.

Waikato owner-operated farmers Nacre and Anthony Maiden says the “stars aligned” this year to give them a particularly bumper maize crop despite the drought and their sandy loam soils.

However being flexible with their planting timing, good communication and use of their Herd Homes effluent all helped with their maize crop.

“We were impressed with their maize this year considering the soils we farm,” Nacre told Dairy News.

“On other farms we have farmed with peat soil we would get a better crop.

“But for our current soil type, this is the best crop we have ever had. In this particular season that is impressive because there have been a lot of poor crops around, particularly in the Waikato.

“It has been dry, many crops didn’t get rain when needed and there have been some disappointing yields around so we were pleased to have a record year for us this season.

“It is often stressed about getting the maize in the ground early but this year we got it in a bit later because of the weather.

“So one of our take outs would be don’t stress about getting it in early. If the weather is poor it is probably best to hold off. We have had other years when we have planted early to hit that target date and had to replant the paddock because it was too wet and the seed rotted.

“Another take out was good use of our Herd Home effluent to help grow our maize crop.”

That is their usual practice but this year “the stars aligned”.

“We have just been particular fortunate for everything to align well between the weather and getting the effluent on when we did. It is a challenge. You are coming towards maize planting time and on a lot of farms you have spring cows that are finishing calving or are starting mating so people are tired and worn out before you start the cropping process.

“It is easy for things to get overlooked or to be too busy to get things done in a timely manner and you rely too much on other people to get things done for you. We had a particularly good well organised run of communicating well with the contractors and being firm with them if it is too wet.

“It was a good combination of being well organised, good communication and having those stars align.”

Their cow housing is authentic Herd Homes brand with a clear plastic roof, slatted floor and effluent collected underneath.