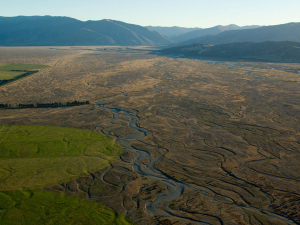 Greenpeace is opposed to dairy conversions in the Mackenzie Basin.

A new decision by the Environment Court on the Simons Pass station in the Mackenzie Basin may effectively prevent more progress by the controversial big dairy conversion.

Environmental Defence Society (EDS) chief executive Gary Taylor said the decision means Simons Pass now needs to apply for resource consents from the Mackenzie District Council to irrigate large parts of the property, and under new rules these may be difficult to get.

The court heard the matter over two days in February and released its decision on April 1.

The 9700ha station is already partly irrigated and carrying about 840 dairy cows in its first season of dairying but is still primarily a beef and sheep farm carrying about 1300 beef cattle and calves and 7000 sheep.

Murray Valentine, of Dunedin, who owns part of the property and holds a Crown lease over the rest, has been working since 2003 on the dairy conversion through various planning and approvals processes.

Valentine told Dairy News he had yet to decide whether to appeal the new ruling and declined to comment further.

Taylor said discretionary consents would need to be publicly notified.

“Because of the new rules to protect landscape that apply, it’s my contention that it will be very difficult for such applications to be approved.

“It could well be that Simons Pass Station will decline to go ahead and much of the area will remain in pastoral farming and not be converted to dairying. That will mean most of the valued ecology will remain, so it is a good outcome for the environment.”

However, Taylor said the property is still likely to go through tenure review.

“The implications of the court decision are that more land should go into DOC control including all the land now protected by Mackenzie council’s new plan provisions.

“Overall, the decision probably means the end of dairy expansion in the Mackenzie Country, which is a very good outcome for the environment,” Taylor said.