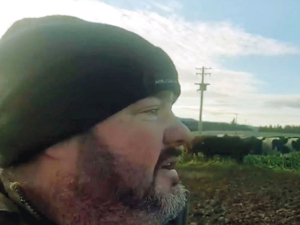 Southland farming leaders and environmental activists have called for a breather in their set-to over winter grazing practices.

Their calls follow their recent confrontation, notably one caused by a Waikato environmentalist, Angus Robson, who campaigned against winter break feeding. He released photos showing cattle in mud on Southland farms.

It blew up on Friday evening, August 9, when Mossburn farmer Jason Herrick confronted activists – at first he feared they were rustlers – on the roadside photographing his stock in the dark.

Next day the same activists were again seen photographing grazing cows and several farmers followed them back to their base at a Mossburn plant nursery, where the farmers set up “a bit of vigil” -- as one called it. That became a barbecue gathering which went through most of Sunday.

There were accusations of intimidation, and of an activist’s vehicle being shunted by another and having a window smashed. Police were called but no charges seem to have been laid.

Herrick later posted a video on social media of himself in the paddock the activists had filmed, showing that the bare ground of the grazed area was not very muddy.

“There are a couple of little muddy spots where the cows were forced into the corner when it was raining and snowing,” Herrick told Dairy News.

“We fenced those areas off so they’ve always got good solid dry ground to lie down on and there’s plenty of it.”

Herrick emphasised that the photos the activists had released were not of his farm.

He said bad apples turn up in every cart and every industry but the activists were trying to make everybody look bad.

“We all care about our livestock. They’re our bread and butter, our future. So we have to look after them. But the way these guys are portraying us is in a different light completely.”

Herrick said it would have been fine if the activists said they wanted to talk it over but they “straight-up lied” saying they were photographing the roadside grass.

“I told them to piss off. And I used expletives.”

The activists are allied with Robson, who in late July launched a well publicised campaign against intensive winter grazing. Several photos were aerials of wet muddy paddocks and several showed cows standing or lying in mud, one having just calved.

Robson said a lot of their video is so bad they haven’t released it because they don’t think it would be good for New Zealand or the world to see it.

However, he said the confrontation was getting out of hand and he had talked with Federated Farmers “to tone all this down”.

Southland Federated Farmers president Geoffrey Young wants the warring parties to get their heads together - gently.

Young last Wednesday told Dairy News he was trying to pull together meetings with all interested parties - Environment Southland, agricultural sector groups and environmental lobbyists - to “try to work through this collaboratively”.

“We want to take a deep breath, stand back and evaluate what’s been happening there. But we don’t condone vigilantism in dealing with some of these anti winter dairying protestors.”

Young conceded that some photos were circulating showing very poor practice “to say the least,” but these may have been out of context if they only showed a corner of an otherwise good paddock.

“Whether animals are in good condition is more a concern to me,” said Young.

“Most of those images are of well fed stock. I’d be most concerned if they were standing in mud and were in poor condition.”

A certain amount of mud does not necessarily harm either animal welfare or the environment, he said.

“But we certainly don’t want to see... those images we’ve seen recently on social media.”

Alan Baird, the immediate past president of Southland Federated Farmers, was at the Sunday barbecue, which he called “fairly light hearted and reasonably low key”.

He said farmers are feeling the pressure.

“Farmers are starting to say ‘Come on, we are people. We are humans. We are the fabric of this province and we’re feeling a lot of pressure’.”

Baird said farmers don’t condone bad practice and know some have to lift their game. But he pointed out that although winter crop feeding concentrates stock on small areas, it is also good for protecting other parts of a farm.

“Each day the cows get shifted, they get fresh break, they get good feed. But if you have rain or snow like happened last week it’s all very difficult.”

They decided to follow up with a “mental health day” barbecue on August 16 for farmers and the public in Invercargill.

But they will not apologise for being farmers, he says.

“Our message is ‘we’re proud farmers, we’re custodians of the land and we’re feeding the nation’.”

He said activists were scaremongering but farmers were open to talk with them if they wanted to.

Activist Angus Robson (the photographer) said the confrontation was distracting from the real message, ie NZ must “shift the needle” on the worst practices - environmental and animal welfare.

“Many good farmers in New Zealand are doing stuff right and they’re just as pissed off about this as we are.”

“Our bitch is with the signalling from the leaders, not the farmers.”