Good – could have done better at Owl Farm 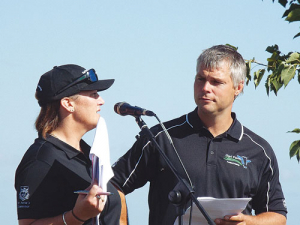 It's been a challenging season down on the banks of the Waikato River for St Peters School’s Owl Farm.

Tracking behind the previous season, the farm is hoping an extended lactation will help pull things back into line.

Visitors at a farm focus day in late March were told that overall production is down by about 5000kgMS (-3%) and still trending downward.

The farm has more cows (412) than last season (378) but performance per cow has been lower, as has the average yield of 363kgMS versus last year’s 370kgMS in the same period.

Demonstration manager Louise Cook said the herd’s diet had changed much over last season: maize was dropped and they struggled to consume the feed from the non-typical high summer growth rates brought about by a summer in which about 50% more rain than usual fell during January and February.

That extreme growth appears to have caused deterioration in pasture quality from late November: testing showed an energy value of 10.8 MJME/kg DM despite being green and leafy with some stem.

The cows went onto once-a-day milking from new year, but condition scoring hasn’t improved, which the management team says was caused by the low energy feeds offered through the summer. By contrast, cow weights seem to have remained static, so farm manager Tom Buckley thinks the herd should be able to cope with a longer lactation to try to replace the current yield shortfall.

The team also noted that higher daily temperatures had put the herd under prolonged heat stress, costing the farm about 2200kgMS -- 7kgMS per cow.

A further disappointment is a low conception rate with no firm understanding of the cause. The resultant six week in-calf and final MT rate sees 71 cows (17.2%) noted as non-pregnant during the focus day.

On the plus side, the farm has grown 2.3 tonnes DM/ha, an increase of 20% on the same period last year, helped by the exceptional summer growth rates.

The farm’s board is now looking to the future, considering keeping the status quo or changing the farm system. Its ‘must have’ list has a primary focus on profit versus environment, but is also considering sustainability, people, animal welfare, and the hot topic -- public perception.

This study, starting out as 18 possible systems, has now been whittled down to two feasible options – lower intensity or spending on infrastructure.

The first option suggests a stocking rate of 2.6 cows/ha, a target of 16 tonnes DM/ha of home-grown feed, and 8% of the farm growing summer turnips.  This, with a reduction in N loss to 34kg, indicates a higher farm profit.

The second option -- more infrastructure – will be partly seen in an effluent pond about to be constructed at a cost of $750k. That choice would see a stocking rate of three cows/ha, a push in home grown feed to 16.5 tonnes DM/ha, and setting aside 8% of the farm for maize production and 8% for turnips.

The biggest difference would be the construction of a feed pad for better utilisation of all feeds, and the installation of a stand-off area to prevent over-grazing and, more importantly, capture more nutrients for onfarm use. Shade areas may also be set aside to reduce cow heat stress.

The aim of the farm is to apply proven research and good farm practice to become a leading example of how to farm while meeting financial, environmental and HR targets, achieve high health and safety standards and, ultimately, encourage young people into the dairy industry.

An 18-month long project to understand how changes on farm to reduce greenhouse gas emissions may impact a farms profitability and productivity has come to fruition.