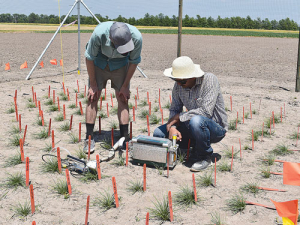 The ryegrass trial in the US.

A newly developed genetically modified ryegrass could be a game-changer for farming, says AgResearch.

The work is funded by the Government and industry partners including DairyNZ.

The genetically modified High Metabolisable Energy (HME) ryegrass was seen in AgResearch laboratories to grow up to 50% faster than conventional ryegrass, to be able to store more energy for better animal growth, to be more resistant to drought and to produce up to 23% less methane.

Modelling also predicts less nitrogen excreted into the environment by animals feeding on the ryegrass, and so less nitrate leaching and lower emissions of another greenhouse gas -- nitrous oxide.

“The preliminary trial was only two months, so it’s not over a timeframe that has any statistical merit, however we did see the increased photosynthesis that we saw with the plants in the greenhouses in NZ,” Bryan says.

“In this full trial now underway, we will be measuring the photosynthesis, plant growth and the markers that lead to increased growth rates. While the growth has previously been studied in glasshouses in pots and as plants spaced out in the field, this will be the first opportunity to assess the growth in a pasture-like situation where plants compete with each other.

“The five-month timeframe will allow us to determine if increased growth is consistent across the summer and autumn, and we will simulate grazing by cutting plants back every three-four weeks.

“Animal feeding trials are planned to take place in two years, which we will need regulatory approvals for, and the information we get over the next two years will help us with our application for those feeding trials.”

“This research could be transformational in future and so it is important we explore all promising avenues which could help dairy farmers respond to the challenges we face.”

While NZ has not yet approved the release of genetically modified crops, Bryan says it is important that the science keeps our options open, and there is strong scientific evidence on any benefits or risks that policy makers can draw on.

“As the Royal Commission on Genetic Modification found, ‘it would be unwise to turn our backs on the potential advantages on offer’. We think the advantages here could be very significant; modelling to date has shown that the HME ryegrass could boost farm revenues by as much as $900/ha, while providing a tool for farmers to manage nitrogen run-off and greenhouse gas emissions.