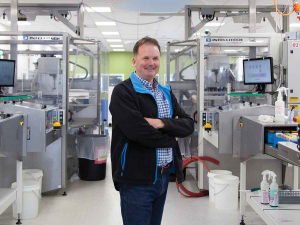 Five new machines will automate milk weighing and sampling at LIC’s herd test laboratories in Hamilton and Christchurch. They will use a combination of laser light measurement, barcode scanning, mechanical rotation and syringe liquid transfer.

Wollaston, LIC’s national herd testing manager, told Dairy News one of the aims is to move away from reliance on manual labour.

“The number of people required to do this process were quite large so it is now a much reduced number,” he said.

“Those people had a very repetitive job and we were losing people through the year. Then you would have to find more and train them etc. It was also increasingly difficult to attract people to what was a seasonal labour job.

“You become very dependent on the labour market and sometimes that is very tight so we struggled to get the numbers needed.

“Now with fewer people needed and a slightly higher level of competency required we have fewer but more skilled people.

“We like to keep them longer. We are not so dependent on the availability of what is at times quite a difficult labour market. That is a problem throughout the industry, even trying to find labour on farm is really difficult, and we have the same challenge.”

The robotics also carry out the process exactly the same way every time so LIC is getting more consistent mixing of the sample and much lower levels of sample contamination.

“So the quality of the results is improved with the adoption of automation as well. The quality issue is a plus for farmers and the labour one allowed us to run the business without as much disruption.”

He says in the conventional weigh station, staff would be handling up to 90,000 flasks which presented some health and safety risks such as RSI.

This automation is the first stage of processing the samples which had been done the same way for 50 years. The second stage is the actual testing of the samples for various components which has been automated for some time, Wollaston says.  There is already a high level of automation at LIC.

The custom designed machines were developed over the past three years by LIC staff with Intellitech Automation, a New Zealand company specialising in robotic machinery.

Wollaston says the machines showcase “Kiwi innovation at its best”.

“The machines had to achieve accuracy of weight measurement and sub-sampling volumes, consistent sample mixing, full traceability of samples and no sample contamination.

“Because of these unique challenges we weren’t able to use off-the-shelf automation and set about designing our own bespoke solution.”

LIC spent $3.2 million on developing the five machines and expects they will result in recurring savings within two years.

The development was a reflection of a long time R&D -- a joint initiative between LIC’s technical team and Intellitech, says Wollaston.

“It has been a good collaboration and a good exercise in problem solving and coming up with a solution that I think works really well for LIC.

“We have learnt from the first at iteration and those learnings have been put into play with all subsequent machines.

“These last few months have been the first real test of the equipment as we have gone through our first period in the North Island and we have been pleased with the reliability. It is going well. It has been a great example of Kiwi innovation and collaboration between two parties.”

Three machines have gone into their Hamilton premises and two will be installed in Christchurch by December.

LIC has appointed Andrea Black as its chief information officer.

She joins LIC from Genesis Energy, where she is general manager digital solutions, leading a team of 60. She is also a key member of the technology leadership team for the wider Genesis group.

Prior to this she worked at Gen-I, part of Spark NZ, and with companies including Westpac and Fonterra. She worked eight years for PGG Wrightson.

LIC chief executive Wayne McNee says Black’s hiring comes at a pivotal time for the cooperative and will help LIC to accelerate its digital transformation.

“The next phase of our digital journey is to take full advantage of big data and serve up real-time insights for our customers to drive on-farm profitability, sustainability and productivity.

“Andrea will bring strong technology leadership background as well as a depth of technical excellence that will drive this work and add significant value to LIC, our staff and our customers.”

LIC has an in-house technology team of 110.

Black was brought up on a drystock farm in Taranaki and now lives in Waikato.

LIC ascending into cloud for technology