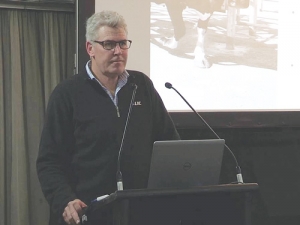 Farmer co-op LIC has to win over a sceptical shareholder base before opening its automation business to outside investors.

The genetics/farm management company's directors and management, during a recent roadshow with shareholders, argued a case for spinning off an agritech company that could attract outside investors.

However LIC's proposal hasn't gone down well with most shareholders, who worry about losing ownership and control of core businesses like Minda and herd testing.

At a roadshow meeting in Morrinsville this month, the biggest concern was the board's proposal to split what farmers regard as the co-op's core business.

The proposal is that LIC would remain a 100% co-op owning artificial breeding, the FarmWise database and genetics. The agritech company, initially a wholly owned subsidiary, would own automation, Minda, herd testing, GeneMark, animal health and the international business: it would invite suitable investors.

"I plead with you not to do this. But I'm very happy with the agritech company looking after automation and other things; that is not our core business," Wallace said.

Wallace thanked LIC for adding billions of dollars in extra revenue to farmers and urged it to continue adding value onfarm.

LIC chairman Murray King told the meeting the biggest problem facing LIC was "tension" between the two classes of shareholders.

With the current dairy downturn, LIC is finding it difficult to raise capital from shareholders to further develop its automation products.

King says capital raising remains a key challenge. "I can't see too many people here raising their hand to give LIC much needed money. Everyone is busy managing their own show and keeping their own business above water. But we need to grow; if we don't grow we will go backwards."

Tatua chairman Steve Allen cautioned LIC's board against pushing ahead with the proposal. The co-op must be careful about what products and services it offloads to the proposed agritech company.

"Be very careful about what you put in the [agritech company]; you will find that you create more tension by doing that."

He urged the LIC board not to over-complicate things and to completely seperate the two businesses. King later told Dairy News that the roadshow produced a wide range of views the board will now consider.

"We have more work to do; we are working with shareholders rather than behind closed doors."

The LIC board hopes to divide the current business in two by December 1. No shareholder vote will be required to split the company into two; LIC's technology and animal husbandry business units will be offloaded to LIC Automation, already operating as a subsidiary.

However, 75% 'yes' votes will be needed to make constitutional changes and allow new shareholders into the agritech company.