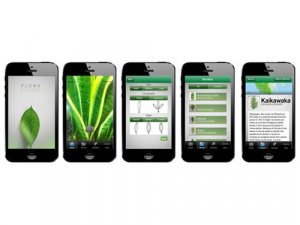 Identifying one of the world’s worst weeds is set to become much easier with the launch of Flora Finder - Weed, a new smartphone app that can detect the aggressive velvetleaf weed that has affected many arable crops in New Zealand. Its outbreak has been associated with contamination of fodder beet seed varieties imported into the country.

The app, available for iOS devices, has more than 100 common weed species in its database. Flora Finder is an electronic field guide that uses visual recognition software to help users identify plants from photographs of their leaves and access expert advice.

Flora Finder - Weed is a joint project between the University of Otago and Kiwi app developer, MEA, with support from WWF-New Zealand and The Tindall Foundation.

According to Dr Graham Strong, commercialisation manager at Otago Innovation – the commercialisation arm of the University of Otago, “the app is designed to quickly identify the most common weeds, along with native trees and shrubs. This represents a real step-change in a battle against weeds that has existed since the advent of organised agriculture”.

Gabriel Engel, CEO of MEA, says that Flora Finder is a prime example of how apps are changing the way we deal with real-world problems: “Flora Finder makes everyday people part of the solution. With this app, we have placed the solution to one of the farming industry’s biggest pests in the hands of the people who are most directly affected.”

If the app identifies a plant as velvetleaf, users should follow the Ministry for Primary Industries’ advice at http://www.mpi.govt.nz/protection-and-response/responding/alerts/velvetleaf

“Weeds cause millions of dollars of damage to our pastures, crops, and gardens each year. Weedy plants are also a great threat to New Zealand’s parks, reserves, coasts, bush remnants, wetlands and alpine areas.”

The base Flora Finder technology was developed in 2013 and is expanding to include native, naturalised and exotic plants from across the entire country.

“Even if for some reason the app can’t identify the plant, users can take a photo and through the app send it to the Botany Department and we’ll identify it for them,” says Dr Lord.

In the case of velvetleaf, this service will prove especially valuable in winter when these plants are dead.

“The leaf image recognition function would not work well in this instance, so the added ability of the app to connect the user with an expert means velvetleaf could be identified from other features such as seed heads, even if leaves are not present,” she says.

“With Flora Finder you become an instant expert in identifying NZ plants – it’s like having the world’s most famous plant experts in your pocket ready to help you when you need them.”