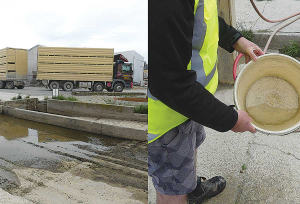 From this to this: A washdown sump at Frews Transport’s Darfield base (left) and water that has been through the ClearTech system.

An installation is now up and running in the Darfield yard of Frews Transport, taking care of the company’s truck wash-down water.

It greatly reduces water use by using a special coagulant to separate out the solids -- producing water clean enough to re-use as yard wash. It also eases effluent storage needs by reducing the volume going into the ponds and eventually onto the paddocks.

For Frews, a family business with a 100-year history of servicing the Canterbury rural economy, the problem was the water used in washing down the fleet -- stock trucks in particular.

“You can spend four or five hours washing out one truck. So that’s a lot of hose time and a lot of water going out.”

But Frew said the main aim was reducing the water intake, to get in line with their water take consent.

The company was using 20,000 to 22,000 litres a day but is only consented for about 7000 – a figure he says was “plucked out of the air” 20 years ago when consenting came in but no-one really knew how water issues would develop.

Although the company has yet to get its latest quarterly water bill, he believes water use has dropped dramatically since the Cleartech system was put in.

The contaminated wash water goes into a 30,000 litre settling tank, where coagulant is added and mixed in. After the solids have settled to the bottom, clean water is pumped off the top to holding tanks and the residue goes back to the pre-existing septic tank system.

The clean water can then be used to wash down more trucks.

Frew said the system has worked “almost too well,” because they were able to recycle such a high percentage of water that after a while an odour developed. That has been tackled by a small increase in the amount of fresh water intake and by adding an aerator to the holding tanks.

Another teething issue was having to amend the software controlling what to do if the settling tank has to be dumped for some reason (if, say, the pH goes out of bounds). In Frews’ situation the tank cannot be dumped all at once but must be dumped in stages.

“It’s been a bit of a learning process but I think we’re getting the system right now, with a little bit of fresh water coming in and recycling most of it.”

The system is largely automated, while being remotely monitored by Ravensdown. At this stage it is leased but Frew expects to buy a system because the trial appears successful.

He does not expect it to pay for itself in reduced water supply charges, but says it will ensure the company can operate within its water take consent.

“It has additional cost, but it’s nothing to the cost of not being able to wash out or having our wash shut down.

“To do anything new these days is hard, isn’t it? If you can build on your existing consent you’re pretty much right but if you’ve got to go and apply for a new one, right from ground zero, you’re looking at significant cost.”

Meanwhile, Frew says a North Island trucking company is also interested in installing a ClearTech system and has come to see how the Frews installation works.

Carl Ahlfeld, Ravensdown’s ClearTech product manager, says he expects to have seven installations running by the end of this year.