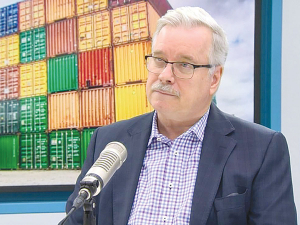 Prime Minister Jacinda Ardern and Trade Minister, Damien O'Connor are in Europe at the moment talking to EU politicians and officials in an attempt to get a quality FTA.

International trade consultant and former diplomat, Stephen Jacobi, says it's believed that the negotiations have reached a critical stage and that officials are working around the clock to try and get a satisfactory agreement.

"But the leaks that have come out of Brussels suggest that an EU offer on agriculture has been met with distain by our dairy and meat organisations and there is a big push to improve the ambition of that offer," Jacobi told Dairy News.

"We understand that in other areas like horticulture there is a good offer already on the table, but the big trade barriers apply to dairy beef and to a certain extent, sheepmeat," he says.

Jacobi says in addition to the EU's poor offer on dairy, beef and sheepmeat, the Europeans are taking a tough stance on the issue of geographical indications. These are names mainly given to cheese, but also wine and some meat, that relate to the name of a particular town or region from where that produce originates.

"Most of the names they want to protect are not problematic for us but the more generic ones sucha as feta, parmesan and mozzarella certainly are.

"If NZ were to put in place a regime, which we will need to do as part of the price of this FTA - it is quite clear we have to have some regime to protect geographical indications - but if that includes these generic cheese names then we are going to be restricted in our ability to sell those products internationally," he says.

The third sticking point in the FTA negotiations, says Jacobi, is a mixture of issues including intellectual property regulations - particularly those applying to pharmaceuticals. He says there are also some issues around sustainability which need to be sorted, with NZ favouring an enforcement regime and EU not so keen on that.

In many ways this trip by Ardern and O'Connor mirrors similar visits over 40 years ago by then Prime Minister Rob Muldoon and Trade Minister, Brian Talboys. They were fighting the same battle with the same arguments to the EU trying to get access for NZ agricultural exports. They were faced with identical opposing views to what the EU is offering up today the only difference is the EU is a much larger organisation now than what it was in the 1970s and '80s.

"So right now there are three issues: market access for dairy, beef and sheepmeat, geographical indications and a bunch of other problematic areas," says Jacobi.

"I don't think it will be possible for the Prime Minister to sort out all of these things - that's really the job for the negotiators.

"But her visit is important because she will be underlining to the senior leadership of the EU the importance of these matters to NZ and at a time when we are standing shoulder to shoulder with Europe on Ukraine. We would hope therefore they would take into account our particular economic interests," says Jacobi.