‘We do enviro differently’ 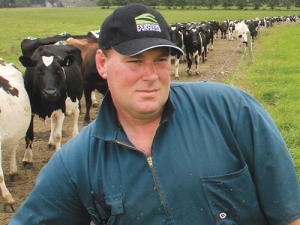 Just home from the World Dairy congress in Lithuania, he says most countries in the northern hemisphere, including the US and Canada, focus their regulations on inputs, whereas in New Zealand the focus is on outputs.

Hoggard says environmental issues were a big topic at the congress and he learned from a Lithuanian delegate how his and other nations manage the environment.

"They have rules on how much effluent they can spread to land; they are focused on the inputs into the farming system. But NZ we have Overseer and the focus is on what a farmer must ultimately control in terms of outputs. The Lithuanian delegate and the others didn't seem to understand and grasp the idea of measuring the output. So in that sense we are different from the rest of the world."

In Europe, for example, the legislation is prescriptive: a large rulebook sets out under what circumstances effluent can be spread or sprayed on pasture. The law tells farmers what to do, whereas in NZ the law states what outcomes have to be achieved and the onus is on the farmer to run his system in such a way that he meets the law.

During the congress the TPP talks were in full flight and when Hoggard told the audience that freeing up trade would solve a lot of the volatility problems in the global dairy sector his remarks were met with stunned silence.

"I told them the present volatility is caused because dairy is such a thinly traded market and that when you get a small supply increase or a small demand decrease that has a big impact. The fact is a 1% production increase can result in a 40% price decrease. The suggestion that trade liberalisation might solve this didn't meet with much favour," he says.

The other major issue raised at the congress related to the anti-milk lobby, Hoggard says. Overseas every week there are reports about the value or otherwise of milk -- some saying milk is great, a few that it's bad. The notion that milk is bad has little traction in NZ, Hoggard says.

The only adverse material he's seen is on the SAFE website which he dismisses as nuts.