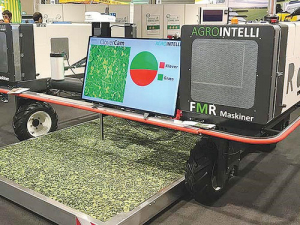 A new sward scanner soon to be launched by Agrointelli (a spin-off from Kongskilde) produces data usable in variable-rate fertiliser plans.

The Clover Cam camera fits any tractor, attaching about 1m above the crop. There it differentiates between clover, grass and weeds during paddock surveys – the key to variable-rate fertiliser plans whereby products are applied selectively rather than ‘blanketed’ over the ground.

Control is via a cab-mounted box; the mapping software is supplied by the developer. Ten units are now in final testing, pending commercial launch, the company says.

Capable of drilling, weeding and spraying, the Robotti operates using a RTK signal from any GPS software; this is defined as ‘supervised autonomy’, whereby once a paddock is mapped the navigation planner will work out the most efficient route to do the job.

The user can still control the unit via a tablet and drive it manually for loading on trailers for transport.

Power comes from two 24hp Kubota 3-cylinder engines mounted on either wing, with the option of electric power in the wings for the future.

Get the diet right

Designed to handle, chop, mix and feed all types of baled and loose feedstuffs, the Kongskilde VM series diet mixers come in 6.5m3 to 45m3 sizes made from S500 and S650 steel to last longer.

Don’t get hooked up on paint

Anyone who has broken in a new plough will know the frustration of waiting until all the paint has come off.