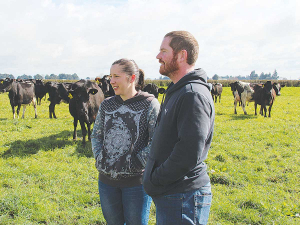 The Waikato sharemilkers knew they had to increase the value of their asset smartly. Their focus on their cows has never since wavered.

This spring, with no intervention, and within 22 days of the planned start of mating, they want 100% of their herd submitted to artificial insemination.

From that, they’re aiming for a 90% six-week in calf rate.

Their herd’s calving spread during the same period has more than halved, from 15 weeks to just seven weeks. They’re targeting a calving spread of six weeks next season.

The couple arrived on their farm in 2015 with a real mix of animals they had bought with borrowings from family and the bank.

Player wasn’t brought up on a dairy farm, but he had done and apprenticeship in the rural sector, working in dairying in Ireland and England and on a Waikato drystock farm, followed by two years contract milking in 2013 and 2014.

“So in 2015 I purchased five mobs -- a core herd of 180 plus 35 heifers and three other smaller lots that looked good for the right price,” he said.

That took him up to the required 270 cows he needed for the system 3 farm.

“We had a mix of big Holsteins and tiny little Jerseys. Because we’re sharemilking there’s always a need to keep the BW (breeding worth) up, but once we had the cows the focus was on improving them.”

But then came a ‘payout crash’ which saw dairy farmer cashflows almost halve from $8 in the previous year. Player took action.

“You can’t make much money in your first season at that kind of payout. Because we were struggling I immediately culled all the later (calving) cows. I got $1200 on-the-hook … that high beef price got us through. But it dropped us down to a 250 cow herd. The last cow that year calved on 26 October.”

The tough start to their sharemilking career was down to unlucky timing, but they believed in the fundamentals for medium-long term success.

Sticking to a 250-cow herd, they adopted an improvement strategy -- stock sales, culls, and a focus on repro, health and selective genetics.

“In the first two years we culled and sold on calving date, and we brought the calving period shorter by two or three weeks each year,” Player said. “I try not to cull, I prefer to sell and to get a good price I’ll sell early.”

Today the Player’s artificial insemination period lasts 22 days, before they turn to the bull for 24 days, and finish off with short gestation length dairy for 10 days. These later cows are able to recover about 10+ days-in-milk and this has helped progressively condense the calving pattern.

The emphasis on a high submission rate and a high six week in-calf rate means the calving period is progressively tighter, but this is key to the production gains.

“It’s days-in-milk for me. I’ve done 14,000 more solids than previous sharemilkers have done under this owner for the last 10 years (despite the lower the stocking rate).

“A lot of that is down to calving spread. Last year I was 10,000 solids ahead in the first three months, so for us it’s just a case of staying ahead through the season.”

“Having a very supportive owner has enabled me to change the way some things are done and try a new approach.”

The Players don’t go in for intervention, preferring to manage feed and cows so as to maintain good condition year-round.

“It all comes down to getting cows in-calf early, because every other option stems from that. A low empty rate gives you more options.”

For artificial breeding, the Players continue using LIC’s genetics to strike a balance between Breeding Worth (BW) and the traits-other-than production he’s after.

Identifying the true bottom-end cows is key to continuous genetic improvement, and this feeds into repro management and maintaining cashflows.

“I want to maintain the high number of replacements I’ve got coming through, and not having too many empties always helps because I’m selling every year and I’m avoiding culling where I can.

“If I have 50 heifers coming through, 10 might be culls, 20 might be empties, but I’ve still got another 20 I can sell, and I pick them out by looking at their figures, udders, age and breed.”

On December 1 he will weigh his herd because he wants to compare the 350kg Jersey to the heavier Friesian, ultimately aiming for an animal doing 1.2+kg milksolids per kilogram of liveweight.

“I’ve got quite a few doing that, but I want to find out where they’re all at in the efficiency pecking order.”

Homing in on accurate production worth figures takes account of breeding values of protein and fat, as well as liveweight and milk volume.

This should refine the herd’s selection pressure further, helping Simon Player to make the incremental gains that become progressively harder to achieve over time. And the subtleties matter, he says.

“Because we’re Open Country suppliers we get paid twice as much for protein so there’s not a lot of need to chase fat content. And we’re on free-draining soils here. I’m chasing a quality cow with a quality udder that’s highly fertile and does good production.

He keeps calves only from the cows he likes milking. He’s selective and is careful to bring in a better standard of heifer each year.

“This year we’ve got it sorted. I’m excited because next year will be the first year of good heifers coming through and the mating and repro results are so much better.

“I like to walk in the shed and feel proud about the cows I’m milking, or walk through the paddock and admire the condition of my herd.”

Health and wellbeing in the herd is a significant factor, he says.

“When cows are healthy they perform that much better.”

In the last year, the herd’s somatic cell count was about 51,000, putting the herd at the top of the Open Country supplier index for SCC.