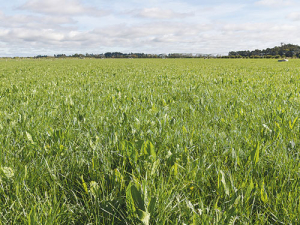 The scientists, with funding from the New Zealand Agricultural Greenhouse Gas Research Centre (NZAGRC), set out to compare emissions of the potent greenhouse gas nitrous oxide from soils containing different types of forage – perennial ryegrass, white clover, plantain and lucerne -- during different seasons at a dairy farm in Waikato.

Agricultural soils, and the urine deposited by grazing animals, are the main source of nitrous oxide emissions globally and are a major contributor to greenhouse gas emissions resulting from human influence.

“A significant finding from this study was that in autumn and winter, nitrous oxide emissions were 39 to 74% less where plantain was planted, compared to perennial ryegrass,” says senior scientist Dr Jiafa Luo.

“Lucerne also saw lower emissions compared to the ryegrass in winter and autumn, but smaller reductions than in the case of the plantain. In summer, we found emissions from the plantain and lucerne were actually higher than the ryegrass, which is something that needs to be explored further.”

Luo says previous studies have shown plantain can reduce the amount of nitrogen excreted in the animals’ urine; however in this latest study the same urine type (from animals fed ryegrass and white clover) was applied to all of the plant types tested.

“So other factors may be involved, and one may be that plantain releases biological nitrification inhibitors into the soil which reduce the nitrous oxide emissions.

“What this research tells us is that incorporating plantain into grazed pastures could be an approach to reducing emissions. However we need to do further work to examine the process by which the emissions are reduced, and how this is impacted by different conditions in the different seasons.”