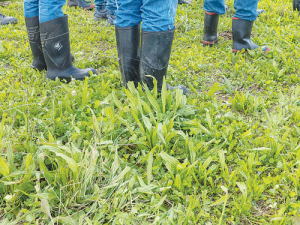 The plantain product Ecotain has been shown to reduce nitrate leaching from urine patches in dairy pastures by up to 90%, says Agricom product development specialist Allister Moorhead.

Moorhead was reveiwing the product at the recent Lincoln University Dairy Farm Autumn Focus Day; it was held at Lincoln’s nearby Ashley Dene research farm rather than LUDF itself, largely so attendees could inspect an experimental paddock of plantain and white clover.

Moorhead said that while plantains had been sold for many years as a means of adding diversity to a pasture, Ecotain was the first farmers could sow specifically for its environmental value. Not all plantains work the same way, he said.

The product is an existing cultivar whose properties were only recently identified, via the Forages for Reduced Nitrogen and Greener Pastures projects.

Repeated lysimeter work had shown nitrate-leaching reductions of up to 90%, said Moorhead.

“The consistency of that research is outstanding when you consider that we didn’t have a clue about this four years ago.
“Now when you can get figures of that amount coming out of lysimeters and you’re under pressure to make change on your farm to meet future expectations in nitrogen loss, suddenly getting something that creates that big a difference is a big deal.”

Changes in the soil brought about by the plant itself reduce the speed at which ammonia in the soil turns to nitrate.

However, Moorhead told the focus day that plantain is not a perennial. While it can re-seed itself it cannot set quality seed heads.

“It is a plant that sits inside a pasture environment as a secondary or even sometimes a tertiary species, which means the stronger your ryegrass environment the more successful you are as a ryegrass grower; sometimes the harder it will be to keep Ecotain inside your landscape for a long time.”

He said there is no easier way to get an elevated plantain content than by sowing it within a new perennial ryegrass pasture, but the plantain content will decline through years two and three.

It would not be a silver bullet “tomorrow”  but could become important “the next day,” said Pellow.

“We need to start now... thinking about how we’re going to get to where we want to be in five years with it.”

Pellow presented graphs showing how a 50% reduction in N-leaching from year one after sowing a paddock in a plantain-mix, could be expected to drop to 15% by year four but could be maintained by re-introducing plantain at regular intervals, say, in years five and eight, by broadcast or direct drilling.

On a farm doing 10% annual regrassing that would eventually get to a 30% reduction on the whole farm.

“That needs more work, to see what it will look like on an individual farm and how you’re going in maintaining that plantain percentage,” said Pellow.

Moorhead said the biggest issue farmers would face would be weed control because plantain is a broadleaf herb susceptible to herbicides.

“It’s always been our problem with the adoption of herbs in pasture that we don’t have a wide variety of herbicides effective on tougher weed species.”

However there are two registered chemistries that can be used with plantain, and more on the horizon.

Federated Farmers has released the finalists for the Primary Industries Awards, to be presented in Wellington on July 1.

LET FODDER beet grow out rather than raid it for a summer feed if at all possible, says Agricom’s Northland North Island sales manager Ben Trotter.