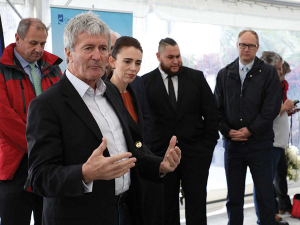 Agriculture Minister Damien O’Connor is predicting huge international demand for a native seaweed if research proves its worth as a potential methane buster for agriculture.

The seaweed, Asparagospis armata, has already been proven to reduce greenhouse gas emissions in livestock by up to 80% when used as a feed supplement.

Nelson’s Cawthron Institute has been granted $100,000 from the Government’s Sustainable Food & Fibre Futures fund through the Ministry for Primary Industries (MPI) for a one year project to investigate commercial scale aquaculture of the weed.

Cawthron, New Zealand’s largest independent science organisation and an expert in aquaculture and freshwater and marine ecology, is contributing $150,000.

Announcing the grant during a visit to Cawthron with Prime Minister Jacinda Ardern, O’Connor said the research estimated that if just 10% of global ruminant producers adopted Asparagopsis as a feed additive, it would have the same impact on our climate as removing 50 million cars from the world’s roads.

“Farmers know better than most about the effects of climate change and many are innovating so that they can drive down on farm emissions. They need technology like this to help them get there.”

O’Connor told Dairy News the new research was the next stage of moving towards commercialisation, to see if it can be scaled up and delivered to animals in our farm systems in an effective manner.

“We run a unique pasture based system in New Zealand but we are very innovative. Ensuring that the development of Asparagopsis into a practical form that can be delivered on a regular basis to cows and be really effective is the challenge of this project.

“If this is proven to be effective as predicted there will be huge international demand for it.

“Not only do we gain from methane reduction within agriculture but a huge opportunity for agriculture as an industry itself,” he said.

The research will be carried out by Cawthron with researchers from the University of Waikato and Australian macroalgal scientist, Professor Rocky de Nys.

Methane from cows is regarded as a significant greenhouse gas. It comes from a group of microbes called methanogens in the rumen which produce methane from hydrogen and carbon dioxide as the rumen contents breaks down. The seaweed contains chemicals found to suppress those microbes.

Research already done in Australia has shown that the seaweed, once harvested and dried, can be used as supplementary feed. The next phase is to develop an early proof of concept of the aquaculture production systems needed to develop Asparagopsis at scale.

“We are excited to offer our aquaculture expertise as part of this collaborative research effort.

“This type of seaweed is native in New Zealand, but there is not enough of it to meet the potential demand from farmers which could be thousands of tonnes each year. Part of our job is to work out how this could be grown at mass scale in order to meet demand domestically and globally,” he said.

“This research project firmly aligns with our aim of using our independent scientific research to help protect our environment and support the development of sustainable industries.

“This project will build on Cawthron’s world leading algae research, and Asparagopsis is just one of a number of seaweeds and algae that have high value potential for New Zealand.

“Micro and macro algae (seaweed) are an area of global growing interest due to their unique properties. We already work with a range of commercial partners to optimise the growth of healthy algae strains for successful aquaculture and increasingly to identify algal species, like Asparagopsis, with the potential to produce high-value products,” said Eason.

“Aquaculture is a young industry with enormous potential for this country, not only in the field of algae, but also open ocean farming. Our hope is that our research will enable our industry partners to reach the Government’s target of aquaculture being a $3 billion industry by 2035.”

O’Connor said sustainable agribusiness and transitioning to a low emissions economy is a major focus for the Government.

“It’s why we established the $40 million a year SFFF fund last year: to invest in projects that deliver economic, environmental and social benefits for all Kiwis.

“Aquaculture is a growth industry for this country and has the potential to play a more significant role in our economy. It’s currently worth $600m a year and employs over 3000 people.

“The Cawthron project could lay the foundations for a new high value industry, along with the jobs that go with it. There are also export potential and on farm economic benefits, including price premiums for milk and meat.”