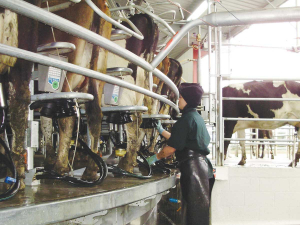 What should you do when your milk fat percentage has fallen?

Recently, I have had several calls from different farmers wanting to know why their milk fat percentage is lower than usual. Of further frustration, in just about every case, the volume of milk produced by these herds has been higher than previous seasons.

In most cases where milk fat % appears to have dropped relative to other seasons, the cause is nutritional and less frequently changing genetic profile of the herd.

To gain a bit of an understanding as to what influences milk fat, it is important to have a basic understanding of where milk fat originates from in a lactating cow. Basically, milk fat comes from three sources, repartitioned body fat reserves (mainly in early lactation), fats from dietary sources (PKE is very high in fat relative to other feeds) and fat synthesised in the udder from building blocks in the blood called Acetate (a 2 – carbon ‘Volatile Fatty Acid (VFA)’).

Acetate is produced in the rumen through fermentation of fibre based feeds such as straw, hay, grass silage, PKE & Soy Hull where the rumen environment tends to be less acidic and fibre digesting bacteria are predominating.

The relative amount of Acetate drops when sugars and starches are introduced and fermented in the rumen. This changes the bacterial profile which favours the production of Propionate (a 3 – carbon VFA). In this situation, the rumen environment tends to be more acidic. In extreme cases this can lead to Acidosis. Propionate tends to drive milk volume.

So very simplistically there are two scenarios playing out in the cows Rumen:

A diet composed predominately of fibre which is fermented at a higher pH (more neutral acidity) favouring the production of Acetate, resulting in greater production of milk fat building blocks.

A diet composed predominately of sugars & starches which is fermented at a lower pH (more acidic conditions) favouring the production of Propionate, resulting in greater production of milk volume.

Pushing this effect further, a more acidic rumen environment slows the activity of fibre digesting bacteria and produces greater proportions of other compounds which themselves are capable of entering the blood stream in higher concentrations and switching off the mechanism in the udder for producing fat. This is known as dietary induced milk fat suppression.

From a cow perspective, the majority of spring calving cows in New Zealand, once summer rolls around, are depleted of body reserves and not at the stage of lactation where they are programmed to sacrifice body reserves. At this stage of lactation, the effect of the diet offered on milk components becomes more exaggerated.

The recent industry push to cut back on the feeding of PKE a high fibre high fat feed has resulted in many herds turning to alternatives. These alternatives generally tend to have less fibre, less fat and often more sugar and starch than PKE. This provides some explanation to higher milk volume and lower fat percentage being observed by some farmers.

So, if you are experiencing some weird and whacky milk fat percentages, have a run through your inputs and how they have changed over the last few seasons. Pulling the PKE may save your FEI but bomb your milk fat percentage.  As the saying goes, there’s no such thing as a free lunch.