Thoroughbred ute will cut it in town, country 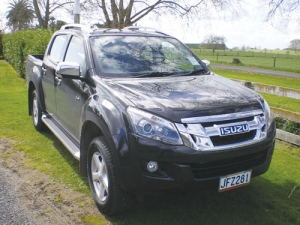 Large passenger vehicles seem to lost favour in suburbia, giving way to utes as the macho movers and shakers.

With this acceptance, car companies have seen a demand for more car-like creature comforts mixed with rugged exteriors.

The new LS-T D-Max from Isuzu is worth a look, because the ‘bones’ of the machine have proved themselves capable over the years, especially in the hands of ‘tradies’, known to give their vehicles a hard time.

The 30L turbo, common rail diesel engine pushes out a respectable 130kW at peak torque of 380Nm across a broad rev range, helping the truck hang on during long climbs and negating the need to grab a lower gear to keep momentum.

The five speed transmission is smooth and precise, using control technology that monitors the driver’s habits of acceleration and braking, and altering transmission shift points to suit tier style. The manually controlled sequential shift option allows a sporty driving style and can be used to hold the vehicle in a particular ratio for climbs or descents.

The 2WD version as tested was fitted with safety features such as ABS, electronic brake distribution that detects the load in the rear and adjusts the braking effect to the rear axle, and traction control that allows the machine to take on slippery stuff, although serious off-roaders are more likely to want the 4WD model to ensure they get to their destination.

On ‘urbanisation’, the first impression on opening the doors is the seating arrangements: leather upholstery which looks a little decadent for a ute but will suit the intended market and probably better handle blackcurrant spills by the kids and drools by Dave the dog.

The driver gets the added bonus of 6-way electrical adjustment, although this test driver found the angle of the seat pan from front to back was very limited. The second row also has leather, and although lacking any adjustment it appeared roomy and comfortable, and had the option of being laid flat for large items, or as a perch for old mate Dave.

Creature comforts for trips to the beach or to see the relatives are by set-and-forget climate control air conditioning for an even temperature, and a six speaker entertainment system with DVD Player, USB, I-Pod and Bluetooth connectivity for up to five devices at any one time.

The tailgate mounted rear view camera is a must for hooking up trailers, and getting into tight parking spots, and a touch-screen sat-nav system ensures you end up where you intend.

Ride quality is as good as most utes in the market, and the designers use of an extended wheelbase and wide wheel track has paid off, the vehicle cornering without too much deviation from its course unless distracted by a pothole or poor surface mid-bend.

As with any ute there is a tendency for the rear end to appear a little ‘springy’, but this is improved greatly by a load up to 1007kg or something on the towbar (up to 3500kg in 4WD). Smart 5-spoke alloys run 255 section tyres to complete the look.

Looks-wise the D-Max is up there with the best, and won’t look out of place either onfarm or outside a favourite coffee shop in town.

The fact that the 2WD rides on the same suspension and wheel equipment won’t let anyone know it’s not 4WD unless they start hunting down badges.

The front aspect is bold: big purposeful headlights which blend into the bumper area that includes driving lamps and a cooling intake grille. Down the flanks, a neat pair of running boards look the part, although they are probably more use to a yummy mummy’s size 6’s in suburbia than to a farmer’s size 11’s in effluent. Above are roof bars that pay homage to the urban intentions, and a racy shark-fin aerial completes the look.

Summing up: a truck that will find a following considering its existing pedigree as a trusty workhorse, and offering street appeal to townies not needing 4WD.

You wonder how the marketing people in the motor industry come up with new model names.

The Amarok 'Aventura' model will hit New Zealand at the end of the year and ought to make it onto the big 'must have' list.

Utes or pick-ups, as they are known in the northern hemisphere, don't have the following they have in these southern climes...

Prado proves not all 4WDs have gone soft on the road

When it comes to four wheel drives the ubiquitous Toyota Land Cruiser has been around for 60 years, and the Prado variant for the last twenty.