No longer a sideline player - Editorial 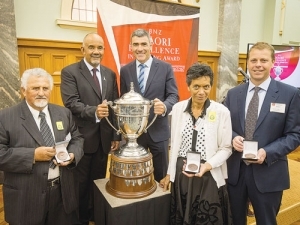 The resilience of Maori agribusiness is back in with the announcement of the finalists in this year's Ahuwhenua trophy competition to find NZ's top Maori dairy farm.

The resilience of Maori agribusiness is back in with the announcement of the finalists in this year's Ahuwhenua trophy competition to find NZ's top Maori dairy farm.

The competition was inaugurated 83 years ago and the fact that every year top Maori farms step up shows clearly the determination and desire in Maoridom to showcase their success and build capability.

During this bad patch for the dairy sector it is interesting to see excellent Maori farms unafraid to put themselves forward and show what they are doing well.

They are displaying great leadership to the whole dairy sector and demonstrating that this is not a time to retreat and hunker down; rather it's a time to showcase the Maori agribusiness model – a long term vision of providing benefits for future, not just the present, generation. Maori have a history of managing adversity and coming back stronger and better.

Not widely known is that entering the contest and making the finals requires a lot of time to provide complex data to two judging panels and run a large field day. The farms are required not only to prove they are financially successful but also that they are leaders in the kaitiakitanga (guardianship of the land) and their whanau.

Few NZer's have much idea about farming, and even fewer have any idea of the scale and efficiency of many Maori farms. Maybe that's because they are tucked away in heartland NZ and not on SH1, or perhaps people just don't believe Maori are capable of success.

This year the Ahuwhenua competition has two finalists from the South Island – Ngai Tahu and Rakaia. This is perhaps a further sign that Maori are starting to rise their profile, showing just how big and good is their vision and ability.

The Awuwhenua Trophy competition is hugely important not only for Maori but also for the primary sector as whole.

If they don't celebrate success in the primary sector, no one else is going to do it for them.

Maori agribusiness is no longer an adjunct to the NZ economy; it is now an integral part of it and over time its contribution will grow to new heights – not just in dairying, but in all primary production.

The winners of this year’s Ahuwhenua Trophy for Excellence in Horticulture believed they didn’t stand a chance and never expected to win because their fellow finalists had bigger operations.