Why are NZ cows giving out so much methane? 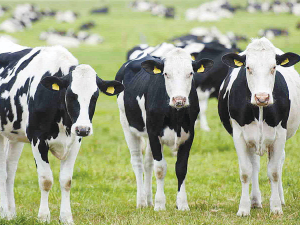 OPINION: Why are New Zealand cows emitting so much methane?

The answer lies in the poor quality of pasture the animal is consuming.

Thus there is now a reliance on supplements to fill the shortcomings of the pasture, a limitation that comes at a hefty economic cost to the farmer.

Cows by and large are fed nitrate-rich, crude protein-rich pastures that are low in carbohydrates, sugars and starch. The microbes in the rumen therefore lack the energy to efficiently convert the plant material into milk, meat and fibre. Instead, more than 80% is converted to NH3, CH4 and CO2. The production of these gases could be significantly reduced by simply presenting the animal with energy-rich, species diverse pasture.

While methane is reported as a major GHG accounting for over 40% of NZ emissions in its global warming potential, it’s a gas that’s rapidly broken down in the atmosphere by hydroxyl radicals photo-oxidising CH4 and CH3 (methyl, a non-GHG), and CO2.

Moist air above pastures in fact photo-oxidises far more CH4 than is able to be produced by the soil or animals grazing that area.

Carbon dioxide should be seen as a critically important resource where its associated C can be sequestered into the soil by promoting the capacity and rate of photosynthesis, the density and length of the root system, and the biomass and activity of soil microbes.

We can more than offset all our emissions by simply sequestering sufficient carbon from the atmosphere, but more importantly we need to reduce our overall emissions. Despite commonly held perceptions, this can easily be achieved by simply changing to management practices that address the root cause of our high emissions rather than attempting to mitigate them by applying the many band-aids now developed.

This has significant implications for the Zero Carbon Bill now before a parliamentary select committee. Unless we implement those farm management practices that enable the sequestration of soil carbon by the drawdown of atmospheric CO2 and minimise the emissions of CH4, we will continue to fall short of the emission targets set.

In addition, it has been shown that methane emissions can be slashed by more than 80% by adding seaweed (Asparagopsis taxiformis) to the cow’s diet, highlighting the importance of diet in mitigating methane emissions.

At a GHG workshop at Massey University a few years ago I asked, “how would improving a cow’s diet affect the emissions of methane?” The answer given was no more than 10%. How wrong they were. Like us the animal responds to what it eats.

The real concern with methane is its vast storage and emissions from formerly frozen methane hydrates on many continental shelves. This of course is outside the realm and influence of NZ’s agriculture.

We need to use our grey matter more to think about what’s in the dry matter. If we don’t, the public and politicians’ perception that agriculture is destructive to the environment will continue and our markets will turn more towards plant based and synthetic milk and meat products.

Unawareness, vested interests and groups that lobby for something similar to the status quo are a concern because they come with a high economic and environmental cost. Because our total emissions have increased 800% since 1990 (Stats NZ) one must ask whether their focus on implementing band-aids to offset our high environmental footprint has worked for us.

• Graham Shepherd of BioAgriNomics is a soil scientist and independent farm advisor and author of the Visual Soil Assessment.