Summer strikes on the cards 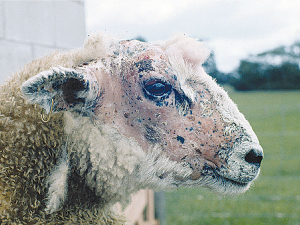 The clinical signs of FE are obvious, but it is generally accepted that for every obvious clinically-affected animal, ten others will have sub-clinical effects.

A warning has been issued to farmers about the dangers right now of both facial eczema and flystrike.

Beef+Lamb NZ's (BLNZ) senior biosecurity and animal welfare advisor Will Halliday told Rural News that the climatic conditions around the country are perfect for both of these, with flystrike nationwide and facial eczema (FE) especially in the North Island, but also in the top of the South Island.

Halliday says the warm, humid weather is creating the ideal conditions for FE because it's essentially caused by a fungus. He says the same moist, warm conditions are also ideal for flies to lay their eggs and produce maggots on the backs of sheep.

Halliday says the FE-causing fungus feeds on decaying organic matter at the base of the grass sward.

"Summer is the time when the grass dries off and that vegetative matter starts rotting down at the base of the sward, so that's why you have got perfect growing conditions and plenty of food for the fungus," he explains.

"FE is more about the humidity, not so much the wet and dry. But if you get a spell of rain it will wash the spores off the grass that is standing. Then over the next few weeks, as the moisture soaks in and starts rising out the soil, you can get an increased spore count pretty quickly."

Halliday says farmers in high-risk regions can undertake weekly monitoring of their own property and, when spore counts start to rise, put management strategies in place to prevent stock being affected by this production-limiting disease.

"These could include avoiding hard grazing, feeding 'clean' forage crops such as chicory or plantain, dosing sheep and cattle with zinc oxide boluses or drenches, or adding zinc oxide to cattle water troughs," he adds.

As well as checking spore counts, Halliday says farmers should also observe their livestock to see if they are exhibiting any clinical signs of FE - such as droopy ears and peeling skin on the face, especially of sheep.

Halliday says BLNZ has started publishing spore counts in its weekly e-diaries and will be launching a regional text service in the near future to alert farmers of high spore counts.

The Effects of FE

Will Hallida says when FE spores get into the rumen of the animal they release a toxin called sporidesmin, which attacks the liver.

The liver is the organ of the body that turns the food into protein and energy.

He says once this is attacked, the animal can no longer produce milk as effectively as it should and it generally affects the overall health of the animal, now and in the future.

Halliday says the clinical signs of FE are obvious, but it is generally accepted that for every obvious clinically-affected animal, ten others will have sub-clinical effects which are just as damaging.

"Right now, we are trying to fatten up lambs as quickly as possible and we are also trying to put condition back on ewes so that they are ready for the ram," he explains.

"So, any disease is going to slow down lamb growth and also going to hinder the ability of the ewes to get pregnant. Long term it might mean that your ewe flock as a whole is not going to be as fertile as it should and this will manifest itself as more dry ewes at scanning time."

In terms of treatment or prevention for FE, zinc is an obvious option because it binds with the toxin in the rumen and prevents more liver damage. But Halliday points out that animals need to be drenched with zinc at regular intervals for it to be effective.

He says there are a range of proprietary products on the market to deal with FE for both sheep and cattle. He adds that dairy farmers often put zinc in reticulated stock water supplies.

"The other point to make in the case of sheep is, since the 1980s, ram breeders have been breeding for FE tolerance because it is a highly heritable trait. That is a game changer in terms of protecting your business and flock from FE."

Warnings out on FE