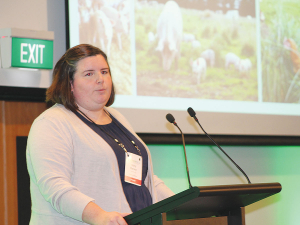 If the disease reaches our shores “we will overnight lose every single pig in NZ,” she told the recent ProteinTech19 conference in Auckland.

Pearson says she hears this from “all the vets and all the people we speak to”.

“With consumers, the penny hasn’t dropped yet about buying imported product. Every single person who does that puts our industry at risk.

“That will have massive blow-out effects for all sorts of agriculture businesses, especially around South Canterbury where there are a lot of pig farms. I don’t think we have got our heads around that yet.”

Pearson says she is “absolutely not satisfied” that MPI has a handle on it as much as they say they have.

“I wait, hope and pray we will not have to grapple with it here.”

Pearson says she has seen information that pork is still imported into NZ from China, Poland and other countries that have confirmed ASF. She says MPI claims it is satisfied that the vet check that comes with this imported pork means it is not carrying the disease.

But she says there is “absolutely” a threat from processed products as well as raw pork.

Pearson says investigations into an outbreak last year in Belgium, which has strict biosecurity controls, have shown the disease likely came from a truck driver who threw a ham sandwich out of his window.

“It got into the wild pig population.

She says every farmer Freedom Farms talks to tells them a wild pig occasionally gets onto their farm.

Pearson also pointed out that the last foot and mouth outbreak in Britain — about 15 years ago – came from imported, processed food waste.

Only about 40% of the pork consumed in NZ is grown here, she says. So 60% is imported and in the bacon category that is closer to 85%.

Pearson is welcoming the country of origin labelling coming into effect this month.

“That has been a very big struggle to get that across the line. I find phenomenal the level of resistance there has been to writing on packs of meat where that meat came from.”

Freedom Farm is equated with animal welfare and independent audits are done by AsureQuality to agreed standards.

The audits are based on the five underlying freedom principles: freedom from hunger and thirst, discomfort, pain, injury and disease; freedom to express normal behaviour; and freedom from fear and distress.

“The conversation most started by consumers is on the freedom to express normal behaviour,” says Pearson.

When Freedom Farms started in 2006, some pork farmers were doing “cool stuff” but were not being financially rewarded.

Freedom Farms is a team of four who do not own farms. They source pork from eight pig farms between Christchurch and Timaru.

Its first offering was bacon, which is still central. But over the last 13 years it has added different categories.

Its products are in 87% of NZ supermarkets and it works hard at answering consumers’ questions.