‘Get in quick’ for subsidised poplars, willows 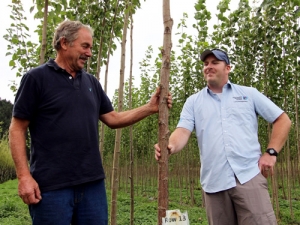 Northland landowners keen to secure heavily subsidised poplars and willows to help control erosion and protect water quality should get in quick.

This is the view of regional councillor Joe Carr, who chairs the council's environmental management committee, says about 5000 3m poplar 'poles' will be available shortly to qualifying landowners for the looming winter planting season.

The council sells the poles – which usually retail for more than $8.50 each – for just $5 (incl GST) provided landowners agree to a farm water quality improvement planting plan to ensure the trees are planted appropriately and future maintainance is allowed for.

Hokianga-based Carr, a farmer who uses his own poplar stocks extensively across his land, says they have been used widely in Northland for many years to prevent and control erosion, nutrient losses and cut waterway pollution.

"Poplars and willows have broad root systems that help bind soil and prevent erosion and as a council we've long promoted their use both as part of our soil conservation and water quality work with the community."

Carr says interested landowners should contact the land management team directly on 0800 002 004 now to allow time to arrange a farm visit to undertake a required planting plan. Orders can be made while stocks last or until Tuesday, May 31, 2016 (whichever is earlier).

Carr says while the use of non-native species like poplar and willow for erosion control surprises some people, the trees are specifically chosen because their fast growth rates means they can begin working as intended much more quickly.

"These trees play a key role in stabilising land and cutting erosion and sedimentation in Northland, the latter – while a natural susbtance – still being one of our biggest contaminants of our streams and waterways."

He says the best time to plant the trees in Northland is typically from June to mid-August.

The bulk of this year's pole supply is being sourced from the council's own poplar and willow nursery near Whangarei as well as selected local partners. This year will also see the council expand its offering with a range of grades of poplar and willow material appropriate for varying situations.

Carr says the council set up its 6ha nursery in Flyger Rd, Mata, several years ago after becoming frustrated with the limited supply of suitable poles in Northland and being unable to find anyone able to grow large numbers on its behalf.

He says anyone buying the poles needs to transport them carefully to avoid damaging the bark (creating the risk of disease or the pole drying out) and ideally they should be soaked in fresh flowing water for 8-10 days prior to planting.

"There are also a number of other considerations that need to be taken into account, including where trees are sited and the ongoing care and maintenance they'll require, hence the requirement for an agreed planting/maintence plan."

He says everything people need to know about establishing poplars and willows is also available from the council's website via: www.nrc.govt.nz/poplars