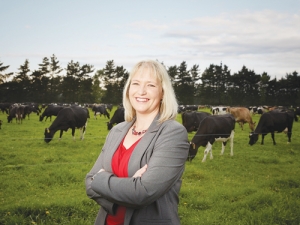 The market downturn in dairy is among foremost concerns for Rabobank dairy research director Hayley Moynihan as she steps into the newly created role of the bank’s general manager Country Banking.

She is sure the bank has the right support systems in place for dairy farmers in its 33 branches, but a first priority will be to ensure the bank stay aligned to farmers needs in all sectors.

Moynihan told Rural News the new role of general manager Country Banking had been created in recognition of the size of the New Zealand business now.

She grew up on a dairy farm in Karamea on the West Coast and has spent her entire career in banking and agricultural markets, the last 10 years as an agricultural economist. She worked in the food and agribusiness research and advisory division, most recently as director of dairy research, New Zealand and Asia.

Before joining Rabobank’s research team in New Zealand she led Rabobank’s London food and agribusiness corporate credit team. Her previous nine years were as a rural and retail banker at Westpac and Trustbank in New Zealand.

Moynihan says the new role is a return to banking and the finance side of the business which she looks forward to.

“The current challenges facing dairy notwithstanding, New Zealand has one of the world’s most dynamic and successful agricultural industries, with a positive and exciting long term outlook in the global markets,” she says.

Subject to regulatory approval from the Reserve Bank of New Zealand, Moynihan will start in the role from July 2.