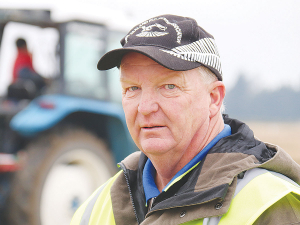 At the recent NZ Ploughing Championships, Ian Woolley of Blenhaim won the Silver Plough conventional competition and Timaru's Bob Mehrtens the reversible event; both will now compete in Ireland.

This year's NZ championships were held at Seddon in the upper South Island. Woolley says soil conditions were really great for the competitions, which attracted about just over 30 contestants from around the country. He says the numbers of competitors were slightly down - due mainly to Covid.

"The weather on Saturday was a bit overcast but still warm and really nice and it attracted a decent crowd of onlookers," Woolley told Rural News. "On Sunday, the weather deteriorated with a sort of misty rain but not cold.

"The venue was superbly prepared and considering that Seddon is renowned for being dry, as a competitor you couldn't have asked for anything better."

Woolley is excited about the prospect of ploughing in Ireland and says the Irish are renowned for their hospitality. He and Mehrtens will borrow tractors in Ireland, rather than try and ship their own. Irish Ambassador Peter Ryan was at the event and because he finishes his posting to NZ in August, will meet up with the NZ team when they come to Ireland.

The World Ploughing Championships will be held near the village of Ratheniska, about 90km south-west of Dublin. The event is huge and incorporates displays of farm equipment and services, much like our national Fieldays - only bigger. Up to 400,000 people are expected to attend the event.