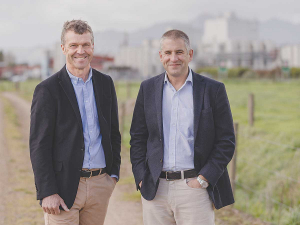 Chair Stephen Allen and chief executive Brendhan Greaney sat down with Sudesh Kissun to discuss the effort behind the results.

Being small and nimble has always been the strength of small Waikato processor Tatua.

For almost a decade the cooperative has been the top performing milk processor in the country.

When Covid-19 reached NZ shores in early March, Tatua was ready. Chief executive Brendhan Greaney recalls that within 24 hours about 100 workers were set up by their IT team to work from home.

“Those who had roles requiring they remain on site worked in discrete groups and operated within social distancing rules,” he says.

With many people away from the office, there was space to set up several cafeterias to keeps groups apart.

Milk was continuing to come into the plant for processing and customers around the world still required products.

“We were fortunate to be able to keep going, as well as to avoid any Covid-19 cases,” Greaney says. Communication was a key factor with farmer shareholders and staff receiving regular updates. One of the first messages to staff was that no one was going to lose their job.

Greaney says everyone played their part and there was massive commitment to looking after each other and the business.

Chairman Stephen Allen attributes the record financial results to its hardworking staff, both here and abroad.

“In the context of the pandemic, it was a huge effort to keep the business running, and on top of that, our people galvanised together and produced a stunning result,” Allen says.

Greaney commented that, “we have a team of people at Tatua, including those in our offshore subsidiaries, who have shown exceptional commitment in taking care of each other and the business through one of the most challenging and uncertain times we can recall. Our result is a credit to them.”

Allen says the camaraderie among staff has been great, noting that during the Covid lockdowns, the management team and sales & marketing staff helped load containers.

Allen believes the co-op’s strong performance over the years strengthened the business’ resilience. Tatua did not apply for the Government’s Covid-19 wage subsidy.

“We have built a very strong balance sheet and we have invested in infrastructure and systems over the past few years”.

Tatua has 107 farmer suppliers, running family-owned farms with a long history of association with the co-operative.

Every year after the September board meeting, Allen and his board members contact each farmer supplier to personally relay the annual results.

This year, the response was overwhelming.

Allen says he’s pleased with the way farmer shareholders conducted themselves during the lockdowns.

He says Tatua farmer suppliers were proud to be part of essential services and continued to operate their farms within restrictions.

“The feedback we got from our farmers is that they feel that they have really contributed something to New Zealand. To be told that you are really making a difference to your country is very inspiring and motivating,” he says.

“In recent years, many farmers have felt they have been put on the spot and it’s hurting a lot of them.”

Allen says the primary industry sector should be commended for its contribution to the national economy during Covid.

“It’s remarkable what the primary sector has done for NZ, not just dairy farmers, but orchardists, sheep and beef farmers and the fisheries sector.”

However, he says Tatua is concentrating on dairy and has no immediate plans to tap into plant-based protein.

He says Tatua will be using the next 12-18 months to “bed down” major projects like its new wastewater plant and a new engineering workshop.

He says planning and research is underway for the next phase of growth.

Tatua’s Cooking Cream is a winner!

Dairy Whip cream can has a new look

The famous can of Tatua’s Dairy Whip cream in Tatuanui has had a makeover.

Waikato milk processor Tatua has announced a final payout of $8.50/kgMS for last season, beating all other processors including Fonterra.