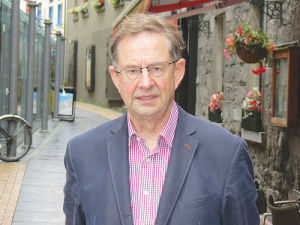 An Irish politician is blaming the inflexibility and hardline tactics of the European Union (EU) on the UK voting to leave the bloc.

Eamon O’Cuiv, the Fianna Fail MP for Galway West, is seen as a maverick even by his own party which is in opposition.

He is the grandson the great Irish leader Eamon de Valera.

O’Cuiv says if the EU had been a bit more flexible in dealing with Britain’s concerns about it, the UK would probably have remained in the union.

New Zealand is also now caught up in the outcome of the Brexit negotiations with potential threats to our sheepmeat exports.

“Whether you like it or not the decision by Britain to leave the EU was a democratic one and the EU’s determination to punish the UK is having flow-on for others. Ireland for one has become the ham in the sandwich and we have to tell them that this is totally unacceptable,” he told Rural News.

One of the major issues O’Cuiv and other Irish political and farming leaders have been expressing concern about is the possibility of a ‘hard’ border being reinstated between the north and south of Ireland.

“Within the island of Ireland we cannot tolerate a border,” he says.

O’Cuiv and others are concerned about the power Brussels has assumed over the years: it was originally an economic union known for years as the European Economic Community, but this has changed and he accuses Brussels of usurping roles once held by individual countries.

O’Cuiv says in many policy areas Ireland is constrained by EU law and there is resentment about this. He says locally they can’t just borrow money to build houses because of EU regulations.

He blames what he calls the ‘federalists’ in the EU who are bitterly opposed to any concessions being made to Britain for fear that other countries will try to do the same and leave the EU. O’Cuiv says, at present, Ireland is committed to the EU, despite now paying more money to the EU coffers than it’s getting back.

For many years Ireland did well out of the EU. Farmers got subsidies and a lot of money was poured into improving infrastructure. Irish motorways are as good as any in the world. But for O’Cuiv, whose whole extended family over three generations has helped shape Ireland, there is a hint that the power base of Brussels is being shaken.

He says Britain’s exit from the EU has caused other nations in the union to rethink their relationship. “Free trade, all agree, is a must, but the depth and breadth of EU rules have got many worried.”

What worries O’Cuiv is that the hardline stance of today may be harder to sustain in the future.

“A union held together by threat – to the point where you will be cut off and frozen out – has no future,” he says.

“We know that [a union] between countries held together not by the wishes of everybody but by threat hasn’t got a proper future because there is no buy-in from the people who are under threat.”