Red Bands still on the march 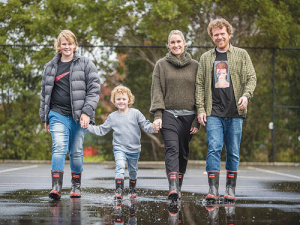 The Jack family from left to right Ethan, Nixon, Melissa and Dave with their Reb Band gumboots.

The maker of revered Kiwi Red Band gumboots is this year celebrating 60 years in production.

Skellerup national manager footwear, Perry Davis, says Red Bands were the first short boots ever made in New Zealand if not the world.

“Traditionally gumboots have always come up to just below the knee,” Davis says.

“No-one is quite sure who at Marathon Rubber Footwear – the forerunner of Skellerup -- had the idea to create a shorter boot but in 1958 the new concept was tried.

“The first Red Band gumboots rolled off the production line on October 21, 1958 and was an instant hit.”

Sixty years later these gumboots are still a staple in most rural NZ households.

And they have heavy-duty cotton canvas bonded to the rubber to give the boots strength, flexibility and protection.

Red Band gumboots were made at Skellerup’s Woolston factory in Christchurch until the late 1980s. Today the boots are made in the company’s new factory in Jiangsu, China.

“They are still hand-made to the original specifications and formulations of 60 years ago,” says Davis. “Each Red Band is made up of 19 individual components with at least six different rubber formulations used in every boot.”

Filling the vat with the best milk you can produce is a financial advantage, says milking liner maker Skellerup.

In the year Skellerup’s iconic Red Band gumboots turn 60, the company is celebrating a record profit.