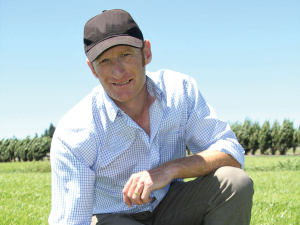 Blair Cotching, Barenbrug Seeds, says it's all a matter of taste.

Pasture renewal is all about setting yourself up for the future, says Barenbrug pasture systems manager Blair Cotching.

"Farming is changing fast; sowing the right ryegrass is one way to keep up with those changes."

And what makes them friendly to both animals, and the environment? The short answer is taste, Cotching says.

"Cows love them: they have juicy leaves, with softer stems, which are very easy to eat. And that applies even when they are a bit longer than what we would say is the best grazing height for diploid ryegrass."

This difference in leaf length before grazing is quite small - only about half a leaf more than diploids.

But it leads to a cascade of potential benefits, starting with more metabolise energy (ME) per hectare, higher cow intakes, and up to 10% more milk per cow.

When every cow generates extra milksolids, because it's so easy for her to eat as much ME as she needs, it then becomes feasible to run fewer cows without sacrificing overall production or income, Cotching says.

"Smaller herds have a smaller footprint. You don't need as many replacements, for example. Animal health, supplement, rearing and other herd costs drop.

"As ryegrass re-grows after grazing, its carbohydrate levels rise, while crude protein and nitrogen content fall.

"So grazing them when they're a bit longer reduces the amount of nitrogen eaten by your cows."

That's good for leaching, Cotching points out. When cows eat more nitrogen than they need, they excrete the surplus in urine or dung. It's this surplus that contributes to leaching.

Being able to leave these tetraploid ryegrasses slightly longer before grazing also means each plant has extra leaf area to capture energy from the sun, Cotching says.

"Think of this as giving the plants bigger solar panels for photosynthesis.

"Again, it's not a huge difference in itself. But when you multiply this effect across thousands of plants in a paddock, it adds up to higher pasture growth.

"Other benefits associated wtih tetraploid pastures include a longer grazing round; more time for the ryegrass plant to respond to nitrogen fertiliser and a proportionally higher nitrogen response."

A new tool that enables farmers to assess the fertility of their soils by looking closely at the pasture quality, vigour and clover content has recently been released.

Contemplating what this year’s dry will mean for your feed supply in late winter and early spring?

Every blade of grass can help reduce rising costs

Every blade of grass holds the power to dilute rising costs

For new pasture you can be proud of - even if it feels too dry to think about it right now - consider sowing seed before it rains, instead of waiting for the autumn weather to smile on you.