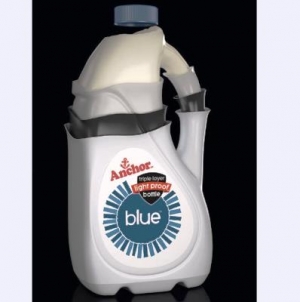 This innovation is designed to deliver Kiwis the best tasting milk in the world by locking in the taste and goodness nature intended.

Anchor's innovation team identified that light ages milk, breaking down its fresh taste and natural goodness. Milk is protected from light from farm to factory, but once it hits the bottle, exposure to light is inevitable. Light damage is a process that can't be reversed and once started, does not stop impacting its taste. It has already begun before your milk makes it home to the sanctuary of a dark fridge. Until now.

Anchor has pioneered a way to protect fresh milk from light damage from grass to glass. And consumers will be able to taste the difference even though they will be drinking exactly the same milk.

Peter McClure, managing director Fonterra Brands New Zealand says, "This innovation is great news for consumers who will now enjoy better tasting milk and cream, and it is a game-changer for the fresh milk market. Anchor has developed a way to actually protect the taste and goodness of fresh milk, which the average New Zealander consumes at a rate of about 1.8 litres per week.

"Our triple-layer, 100% LIGHT PROOF bottle is the most significant innovation project we have undertaken at Anchor. We have developed sophisticated new technology backed by extensive research to apply the concept of light proof packaging to fresh milk and cream for the first time in New Zealand, and as far as our innovation team can determine, in the world. Our bottles now do a better job of protecting what's inside, and delivering milk and cream that tastes the way it was intended to before it has been impacted by light."

"In order to judge freshness, a lot of consumers habitually "sniff test" their milk before it goes into the glass, coffee cup or cereal bowl. Research shows that around 7% of all fresh milk is thrown out because people think it smells "off". But what people are smelling is typically the result of light damage. The key insight around light damage is that even a small amount of light is enough to start the process. Packaging options such as fresh milk tetra cartons and white opaque bottles allow between 7% to 25% of light through. This is enough to kick off the process of light damage, generating noticeable changes in taste within two days, and ultimately generating a failed "sniff test".

"We have also observed that milk consumption is declining. This innovation is about reversing that trend and giving people more enjoyment from their milk, and, for many, a reason to reconsider drinking fresh white milk altogether."

Anchor research shows that seven out of 10 people prefer the taste of light proof milk, even though the milk going into the bottle hasn't changed.

Of particular relevance to a nation of flat white drinkers, blind taste tests reveal that seven out of 10 baristas and seven out of 10 consumers prefer the taste of light proof milk in coffee. In addition, the performance of milk from a LIGHT PROOFTM bottle outdoes standard milk for frothing. This is not only according to baristas who tested the frothing performance, but is confirmed by science. It turns out that light damaged milk contains free-fatty acids that interfere with frothing.

Mindy Wigzell, Nutritionist Fonterra Brands New Zealand, says not only is milk a rich source of calcium, it also contains protein and a number of essential nutrients that are integral to the good health of New Zealanders.

"As the leaders in dairy nutrition we have a role to play in providing the best milk possible to New Zealanders. We have learned that protecting milk from light not only maintains its fresh taste, it also protects some key nutrients that are degraded by light, like vitamins A and B2. We anticipate that the greatest nutrition benefit of light proof may well come from people drinking more of it because it tastes better throughout its shelf-life, which has the potential to have a positive impact on the nutritional intake of New Zealanders of all ages."

Fonterra is throwing its weight behind a donation appeal that aims to feed 15,000 New Zealanders this Christmas.