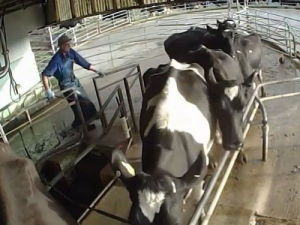 Farmwatch released footage of a Northland sharemilker beating a cow with a steel pipe.

MPI has filed charges against an individual after receiving a video in June this year of a Northland sharemilker hitting cows with a pipe and other objects.

“Six charges have been filed against an individual under the Animal Welfare Act,” says Orr. “As the matter is now before the courts, we will be making no further comment at this time.”

Hidden camera video showing cows repeatedly being hit with a pipe, a stick and a steel pipe during milking was supplied in June by the animal advocacy group Farmwatch.

At the time, Feds animal welfare spokesman Chris Lewis said the sharemilker should “get the eff out of our industry”. Lewis described the video as “shocking” and said there was no room in the dairy industry for farmers who mistreated their animals.

The owners of a Northland farm at the centre of a video also at the time said they were shocked and deeply saddened. The unidentified owners said they would cooperate fully with the formal investigation and the contract milker had been removed from allduties requiring unsupervised contact with stock pending the outcome of due process with regard to contractual obligations.

Animal rights group SAFE says it is pleased to see the charges laid but says that without proper regulatory enforcement, animal cruelty will continue to blight New Zealand’s reputation.

“The ministry in charge of growing and promoting NZ’s primary industries has a clear conflict of interest with its animal protection responsibilities, and the animals are paying for it with their lives.”