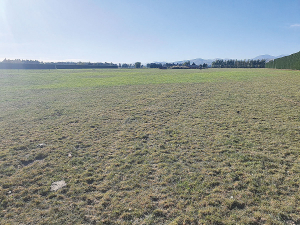 Southland is facing one of its worst droughts, according to some farmers. Photo Credit: Anieka Templer.

DairyNZ's South Island head of consulting officers, Tony Finch, says the drought is now getting quite serious and extends right across the region. He says some of the older farmers have told him this is one of the most prolonged dry spells they have experienced. And he adds that some farmers are using feed reserves to keep milking.

"What is setting this up for the perfect storm is the fact that you have processing delays as a consequence of Covid, which means that people waiting anywhere from six to ten weeks to get stock away. That means there are more mouths to feed and when you are pushing on milking, some farmers' feed supplies are becoming very tight," he told Dairy News.

Finch says with the very high milk price, there is a real temptation to push on a little further into the season. But he says the last thing that's needed is for people to jeopardise next season by eating too far into feed reserves or affecting pasture cover - and most importantly, animal health. He says there is a risk that cow body condition scores will start to suffer.

"In this situation the temptation to keep milking and produce what is essentially 'marginal milk' has to be seen in the context of buying in expensive feed. There is a supply and demand issue here: when feed becomes scarce the price goes up, so if people are buying up feed to try and push the season out, they need to look seriously at the economics of such a strategy," he says.

According to Finch grass growth rates in Southland are non-existent at the moment, but on the positive side, soil temperatures are good so with some good rain there will be an autumn flush. But he says, even if this happens, the region will still be in catch-up more to get farms ready for next season. He says some farmers have acted quickly by getting stock off their farms early, having a good feed budget and adopting management practices to mitigate some of the effects of the drought and Covid.

"This involves going to once-a-day or sixteen hour milking, drying off early calvers and those whose BCS is somewhat marginal. We would encourage people to start thinking about these options now.

"Also with Covid moving south, the delay in getting their cull cows into the works is likely to get worse. If they haven't got them booked they need to do it now otherwise they will be carrying animals additional to their needs a lot longer," he says.