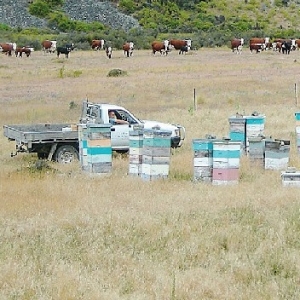 Federated Farmers is calling on the bee industry to unite and ensure they achieve a fully integrated entity peak body.

"The bee industry has long needed a more united approach to its activities, whether it's to do with the government, market access or biosecurity, but it can only be achieved with the whole industry united as one," says John Hartnell, Federated Farmers bee chairperson.

"When you look at the current structure of the industry well less than 1000 are members of an industry body, whilst the industry has 5400 involved. That is our main problem because you end up with 20 per cent funding 100 per cent of industry good activity."

"New Zealand's apiculture industry is estimated to have an economic value to the New Zealand economy of over $5billion, but it could be worth so much more if we had the whole industry behind it."

According to Hartnell without sufficient funding, industry progress is slow and there is no broad understanding of what the industry wants as a whole. This, he says is the reasoning behind forming a united industry peak body.

Hartnell says that at the 2014 New Zealand Apicultural Industry Conference, it was agreed that a change was required in order to achieve a fully inclusive, fully funded industry group structure, which will be a strong platform for the future growth and prosperity.

"Since the Conference Catalyst Ltd has been appointed to lead the Industry Unification Project and to undertake a comprehensive survey of industry to investigate the most appropriate model for industry unification," he says.

"The survey is now ready for input from all those engaged in the New Zealand apiculture industry, whether you are a hobbyist, honey packer, commercial operator or those supplying bee products to industry."

Hartnell finished by saying "Industry unity is a critical issue, with the survey closing on the 6th of March it is vitally important that everyone takes the time to respond and have an influence on its future."