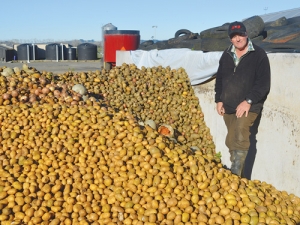 Tony Walters’ 260 cows munch through 20 tonnes of potatoes and carrots every week.

South Auckland farmer Tony Walters is not a computer buff, instead relying on his teenage children to help him navigate the internet.

But he is powering ahead with technology: his 95ha farm at Aka Aka is a pioneer user of Spark's 4G network.

An array of data monitoring gadgets operate on the farm, enabled by more reliable and faster 4G broadband; Walters now has information about each aspect of his farm operation.

He told Dairy News the technology leap hasn't yet translated into higher profit, given the lower milk price during the past two seasons. But the information helps make better manage his farm.

"It enables us to monitor things better and make better decisions based on the information we have," he says. "It's one tool to lift efficiency on farm."

Walters and his wife Marlene milk 260 cows. Three years ago he built a covered feed pad and house with concrete floors and a plastic roof. He needed a new effluent system to go with the buildings.

"At the same time I needed to prove to regulatory authorities that our application of effluent was meeting soil requirements and we were not overdoing things. So I put in a soil monitoring system."

This records soil temperature and moisture levels and looks at how much rainfall the farm gets in 24 hours. Daily at 8.20am it recommends how much effluent can be applied to pasture, based on soil the condition.

Walters knew that such an information trail would provide evidence to the local authority to satisfy them. "I'm not a computer person but I saw the benefits of technology and data collection."

He connected the cowshed temperature into the system, monitoring milk and cooling temperature; water uptake from bore holes on the farm was also hooked up.

Apart from collecting data to show the regional council, Walters found the technology saving him time. He no longer needed to record the information manually in Fonterra's farm diary; it was all done electronically.

Realising the power of recording information he added scales to his feedout gear to monitor how much each cow was fed.

Walters came into contact with Agri360, a company operating a cloud-based farm diary. "It's very smart --a good system," he says.

Using his cellphone or iPad he has mapped the whole farm and records where cows are at any given time, hay and silage made from each paddock and fertiliser application history.

If a contractor is coming to the farm, Walters can email GPS coordinates of paddocks requiring work with fertiliser or spraying recommendations attached. He also emails the farm's health and safety policy, highlighting potential hazards.

"It identifies the paddocks the contractor should be working on, avoiding mistakes, and its not expensive.

"It covers us for proof of placement and health and safety."

Walters' farm was the first to trial 4G broadband, at download speeds of 50 megabytes/second. New opportunities arose in the family home and the cowshed.

When vets are working on the farm, data gets entered directly into Minda or Info Vet (a vet programme). "We record as we do it, rather than trying to remember it when we go home."

When Fonterra's information comes through, Walters can check it on his iPad or cellphone in the milking shed.

"As dairy farmers we spend long hours on the farm; the last thing we want is to go home, sit down and enter information. We do our record keeping at the cowshed or on the quad while bringing the cows in.

"I always believe that unless we monitor and have key performance indicators, we can't make good management decisions."

Though the low milk price may preclude a holiday, Walters nevertheless sees how he could keep an eye on the farm from anywhere in the world.

"Downloads speeds were shocking and expensive for what it was; 4G has changed all that."

Spuds, carrots on the side

His feed regime is similar to most farmers except for 20 tonnes of potatoes and carrots the cows munch through every week. The cows love them, he says.

Walters runs a system 5 farm; supplements are bought in to make up for pasture deficits.

He buys maize silage, PKE and "lots of potatoes and carrots -- a cheap feed; I get a fairly reliable supply now.

"We mix them into the cows' diet; we take tests of pasture then adjust the cows' diet with supplements to give us the targeted production.

"There's nothing wrong with the potatoes and carrots -- we help ourselves to them; they're either too big or too small or damaged in some way."

The potatoes and carrots go into a mixer wagon and everything is weighed; maize or grass silage, potatoes, carrots and PKE are added for the correct ration balance, then trace elements are added and it's fed out to the cows.

Pasture growth on the farm has improved since the feed pad and shelters were built.

"And we're working hard to improve pasture; that's number-one for us; then we add supplements as required."