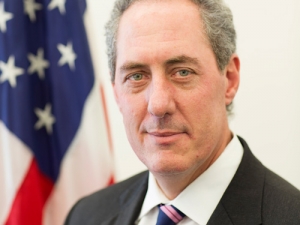 In a letter to US trade representative Michael Froman (pictured) the senators said the US share of the European agricultural import market is shrinking due to tariff and non-tariff trade barriers.

The controversial free trade deal under negotiation between the US and Europe has hit another snag.

A two-party group of 26 US senators is urging US negotiators to look after farming, including key dairy issues, in any free trade agreement with the European Union.

In a letter to US trade representative Michael Froman the senators said the US share of the European agricultural import market is shrinking due to tariff and non-tariff trade barriers.

"A final [trade] agreement that does not include a strong framework for agriculture could have a negative impact on congressional support for this deal," the senators say.

Talks on the Transatlantic Trade and Investment Partnership (TTIP) bogged down after 13 rounds of negotiations over nearly three years; the gulf between the two sides was highlighted by a massive leak of documents which revealed "irreconcilable" differences on consumer protection and animal welfare standards.

All 28 EU member states and the European parliament will have to ratify TTIP before it comes into force; France says it is against regulated trade.

For US dairy farmers, one key issue is the EU's efforts to capture the sole use of food names long considered generic in their countries.

Decades after parmesan, feta and asiago became household favorites in the US, Europe now argues these names can only appear on cheeses produced in Italy and Greece, blocking US sales of so-named products to the EU and affecting sales to foreign markets.

Also, the EU is seeking a leg-up on US food competitors by insisting the US government shoulder the costs of enforcing protection for hundreds of European names in the US domestic market.

"In 2015 we had a record US$12 billion agricultural trade deficit with Europe, due largely to barriers erected specifically to limit exports of dairy foods and other US farm products," Mulhern says. "Any successful European free trade agreement must break down those barriers. The US needs to soundly reject the EU's desire to impose new barriers to competition worldwide and to create taxpayer-funded advantages for its producers in our market. We should be using TTIP to level the playing field."

Tom Suber, president of the US Dairy Export Council, says the opportunity to grow dairy exports and re-balance the two-way trade deficit should be a top priority in TTIP negotiations.

"US negotiators should not conclude a trade agreement with the Europeans without addressing the serious European trade barriers facing the US dairy industry, including restrictive certification requirements and restrictions on generic cheese names," he says.

"Names like feta and parmesan belong to everyone, not just a small group of producers in Europe."

A trend is emerging of farmers posting on YouTube to make money — but just how worthwhile are the returns?

Animal rights group, People for the Ethical Treatment of Animals (PETA’s) request to erect a billboard memorialising 21 cows killed in a tractor-trailer crash in North Carolina has been turned down.