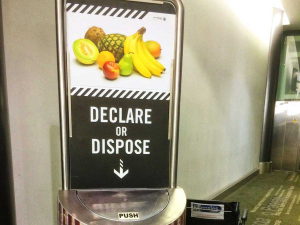 “As a nation that depends on trade and tourism, and a country whose lifestyle is linked to our unique natural environment, having a culture of everyone taking responsibility for biosecurity is vital,’’ O’Connor said.

“Our primary sector is worth over $46.4 billion dollars annually and tourism is worth over $39 billion.  The economic benefits of that flow through to all New Zealanders and we have to protect it.”

The aim of the pledge is to take a more proactive approach to biosecurity by improving the partnership between government and businesses, to help prevent unnecessary costs and disruptions for Kiwi businesses, communities and the wider New Zealand economy.

“The new pledge network will provide increased support to businesses in driving their own proactive biosecurity activity with staff, suppliers and customers. It’s good business risk management. It’s also part of caring for the communities we live and work in.

“As businesses signing the pledge we’re making a commitment to more actively integrate biosecurity into our business activities and supply chains,” he said.

The latest KPMG Agribusiness Agenda, released earlier this year, revealed biosecurity was ranked as the top issue for New Zealand business leaders for the 10th year in a row.

New Zealand Winegrowers' Biosecurity team review the year that was.